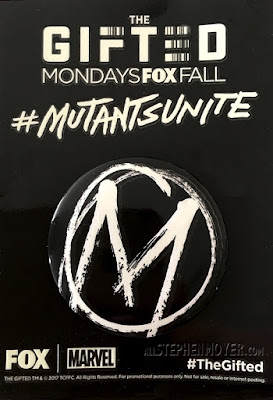 On September 14, I attended a screening in Los Angeles where we were shown the first episodes for three of Fox’s new series that premiere this Fall.

The main reason I went was to take advantage of the opportunity to see The Gifted, and I was not disappointed.

I would have been happy just seeing The Gifted, but it was shown last, therefore we sat through viewings of the pilot episodes for The Orville and Ghosted. I won’t comment too much about either of those shows as this post is about The Gifted, but I can say that neither of them generated any interest for me and I won’t be watching either show’s future episodes.

However, that was not the way I felt about episode 1 of The Gifted. What is already known about it is that it is about a family that includes mutant children who are forced to go on the run as, in their universe, those with powers are locked up.

The episode was fast paced including lots of action and special effects that was fun to watch. Stephen Moyer is always great to see as a “dad,” but here we really do see a bit of what I think the “real Steve” is like; a man who loves kids; especially when they are his own.

The show is very well written and I want to learn more about each of the mutants and their powers, but it’s the timely aspect of the story that intrigues me. Politics always play a part in our lives, and not more than now, so I predict (as have many other reviewers) that The Gifted will be a big hit for Fox. That makes me glad especially because it will mean week after week of Stephen Moyer on my TV screens.

However, the most frustrating thing about the episode for me was the “cliffhanger” ending. I won’t talk of that either as it would give a lot away. But, I will say that after watching this episode, the Starker family have certainly got my curiosity peeked insuring I’ll be anxiously awaiting to see episode 2 to learn what happens next.

Note to Fox: I almost lost my hearing last night during the event. The sound was so unbelievably loud that I thought my eardrums were going to burst. For future events like this, I strongly suggest that you TURN DOWN the sound, please!

Oh, and there’s a very interesting snippet interview by John Doyle, about The Gifted that you might want to read, where he says that The Gifted is much better than expected.
Posted by Lynn Dougherty at 9:53 AM