Gary Calamar – the man behind the curtain of True Blood 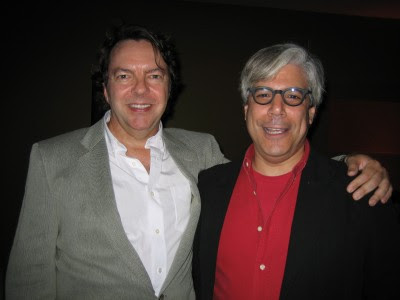 Alan Ball and Gary Calamar
photo courtesy of Gary Calamar
I like to think of Gary Calamar as “the Man Behind the Curtain” providing the music for many of the successful shows on TV these days. Gary is a DJ, Music Supervisor and has managed to do what many of us only dream of, that of turning something that he truly loves into a successful career.
Right now he is working on several hot projects, in addition to True Blood, such as Men of A Certain Age, Dexter, House, I Love You Phillip Morris and is also doing his DJ gig, “The Open Road” on KCRW 89.9 in Los Angeles. Additionally he can be credited on many other shows such as Swingtown, Entourage, Weeds, Six Feet Under, Las Vegas, Varsity Blues, just to name a few.
And if that’s not enough, he has now been nominated for a Grammy for the True Blood Soundtrack compilation CD.
His gift is that he takes the songs that he considers to be “under the radar” and highlights them in scenes of TV shows and films and thus transforms the scene in the process. Below are two examples of his music choices that show such a transformation.
Sia’s song “Breathe Me” became a huge hit after everyone saw this incredible last scene in Alan Ball’s wonderful series, Six Feet Under.
And here is a scene from True Blood Season 2, Episode 10, of Bill walking across the bridge to the Queen’s house. I never would have guessed that this song would make any sense for True Blood, so, for me, what a surprise it was. In my opinion, it was the most powerful scene in the whole series because of it.
And here’s the entire song for your enjoyment.
Recently, Gary generously answered some questions for The Vault about his life and career that I know you will enjoy reading.
Interview with Gary Calamar

Lynnpd: I hear you were raised in Yonkers. Tell us about your childhood growing up there? You say that you liked to listen to a transistor radio under your pillow as a kid. Who were your favorites at the time? What genre did you prefer as a child?
Gary: Growing up in Yonkers, NY was pretty normal. Steven Tallarico (Tyler) from Aerosmith is from Yonkers, Son of Sam too. Fortunately I had an older brother, Ronny, who was into music and The British Invasion, and he passed that love on to me. I loved The Beatles, The Who, The Kinks, and The Small Faces. Every Sunday night was an adventure to see which bands would be on Ed Sullivan and Smothers Brothers shows. My transistor radio was on all night listening to WABeatleC and later WNEW FM. As the Velvet Underground said, my life was changed by Rock and Roll. When The Monkees TV show started I immediately joined the fan club and watched every episode. My first real job was at the Gimbels Record Department in Yonkers and from there I was off and running.

Lynnpd: Tell us about your journey of moving from New York to LA in the early 80′s. What prompted you to make the move? What was your first job when you got there? Tell us about The Balancing Act and your involvement with Licorice Pizza? How did you get involved with them?
Gary: In 1978 some of my Yonkers buddies decided to move to Los Angeles to try and get work in the Television business. I decided to go along for the ride to see what happens. As it turns out I am the only one who stayed in here. My first job was at a great record store called Licorice Pizza. The store was super cool and laid back. We gave out free licorice to the shoppers. It was a great way to learn about LA and the local music scene. At Licorice Pizza I met Jeff Davis and Willie Aron who had a band called The Balancing Act. I eventually managed the band and we had 3 great releases on IRS. I loved working in record stores. I also worked at Rhino Records and Moby Disc. Actually I have a book about that called Record Store Days coming in April from Sterling Publishing.
Lynnpd: You’ve been with KCRW since the early 90′s? How did you get involved there? Can you tell us a bit about the Sunday night radio show and the shows name change? What do you try to convey with the music choices of the show? Even though you are now a Music Supervisor in both film and TV, you continue your stint on KCRW. Is it a labor of love?
Gary: After I left The Rhino store I started to volunteer at KCRW. When then music director Chris Douridas casually mentioned there was going to be a Saturday overnight show opening. My instincts took over. I literally got on my knees and begged Chris to give me a shot. How could he say no ? I eventually settled into my current shift which is 9pm-midnight on Sunday nights, also on KCRW.com. Working at KCRW is a dream come true. It’s probably my favorite job as I can program the show my way and not by committee which is how most TV shows operate. My goal for the show is to play “adventurous pop music both timely and timeless”

Lynnpd: How did you transition from DJ to Music Supervisor? How would you describe the job of a Music Supervisor, exactly what is a Music Supervisor? How does the job differ from film to TV or does it? Tell us about some of the film/TV projects that you enjoyed? Why did you enjoy them? Tell us about some of the projects that were not so much fun or difficult and why? How did you first get to work with Alan Ball? Do you enjoy collaborating with him? Does Alan Ball get involved in the music choices?
Gary: To put it simply the music supervisors role is to collaborate with the producers in creatively choosing songs for the show and then to negotiate the deal for licensing the songs. The music supervisor is also the communication hub between the producers, the composer, the studio, and the network.
At KCRW I met a couple of people pointed me towards music supervision. Chris Douridas who was a music supervisor who was doing some great work like American Beauty. I had also met another music supervisor G. Marq Roswell who had done The Commitments among many other things. Both of these guys were mentors and inspirations to me.
I loved working with Alan Ball on Six Feet Under and now True Blood. Working on SFU (with my ex-partner Thomas Golubic) was like going to music supervision school. Learning the creative process as well as licensing songs. Alan is a great guy to collaborate with because he knows what he likes and he takes music very seriously in his projects. HBO is also great because they give us a proper music budget where we can do some nice work.
These days I also work on the shows House, Dexter, and the new Ray Romano show “Men Of A Certain Age”.
Also coming is the film I Love You Philip Morris with Jim Carrey and Ewan McGregor.
Lynnpd: Talk a bit about Go Music?
Gary: GO Music Services is the company I started to encompass all of my music projects. Radio, TV & Film, Advertising, and Books. It’s a small boutique company. My colleague and music coordinator Alyson Vidoli is a major part of the team as well. She is the “O” in GO Music.
Lynnpd: Who are some famous people that you have met in your career, and who did you enjoy meeting the most?
Gary: I’ve been fortunate to meet many of my musical heroes in my career of radio and music supervision and fortunately all of them were pretty cool. Paul McCartney, Pete Townshend, Elmer Bernstein, Thomas Newman, Wayne Coyne, Tom Jones, Little Richard, just to name a few. I just had Jerry Leiber and Mike Stoller on my radio show. They wrote many amazing songs in the early days of rock and roll (Hound Dog, Stand By Me). They were a treat to meet and talk to.
Lynnpd: Would you consider your participation in Six Feet Under your biggest break so far? If so, why? If not, what was your biggest break?
Gary: Yes definitely.
Lynnpd: Have you won any awards? If so, what are they and which do you prize the most?
Gary: I have been nominated twice for a Grammy for Six Feet Under soundtracks Vol 1 & 2. The True Blood soundtrack is currently up for a Grammy. Fingers crossed. Awards are at the end of January 2010. I have also won Best Music Supervisor TV from The Hollywood Music Awards.

Lynnpd: I think one of the best things about True Blood’s music choices is the fact that, just like with the actors, most of the song choices are little known songs. Is this because of budget or do you prefer to find “unrecognized” music? Budget wise, how do you manage with the funds your allowed? Does HBO give you a big budget for True Blood? If not, does it force you to be more creative?
Gary: I love to find songs that are under the radar to use in the show and help to bring them above the radar. This works both creatively and financially. At the same time we have also used bigger artists like Bob Dylan and The Rolling Stones. HBO gives us a nice budget but it isn’t unlimited. We always need to keep an eye on the finances. So far I think we have a nice balance.
Lynnpd: How do you interact with Nathan Barr on each episode? How is it decided to use his music vs. other musician’s songs?
Gary: Nathan and I see each other at the music “spotting” sessions where we all talk about the music for a particular episode and decide what music goes where. After that he goes back to his studio and creates his beautiful score and I go back to mine to find the perfect songs.
Lynnpd: How did Bob Dylan’s song, “Beyond Here Lies Nothin’” get chosen? Is Bob Dylan a fan of the show? Did you or HBO approach him or did he approach you? What is the story behind his and the song’s involvement with the show?
Gary: Bob and his manager had come to us when they had finished the album and gave us a sneak preview of this song to check out for the show. Alan and I really felt that the song worked nicely for True Blood so we decided to use it for the season 2 promo and Alan wrote it into the closing episode. It also coincided with the release of Dylan’s album “Together Through Life”, so it was nice way to introduce it. And of course Bob Dylan is a vampire, so it just made perfect sense.
Lynnpd: Have you started choosing the music for Season 3 yet? If not, when will you begin the process?
Gary: Just getting started, not too much to report right now.

Lynnpd: As a successful music producer, what are your goals and aspirations at this point in your career? Where would you like to be in 10 years?
Gary: I would love to write a song that the whole world sings. Perhaps produce a music film or documentary down the line.
Lynnpd: Is there anything about yourself and your experience with True Blood that you would like to share with the fans? If so, please elaborate below.
Gary: Thanks for enjoying the show and all the nice feedback about the music.
Posted by Lynn Powell Dougherty (LYNNPD) at 1:22 PM 1 comment: