Last night I attended a discussion with True Blood's creator, Alan Ball during the Vulture Festival at the Hollywood Roosevelt Hotel. 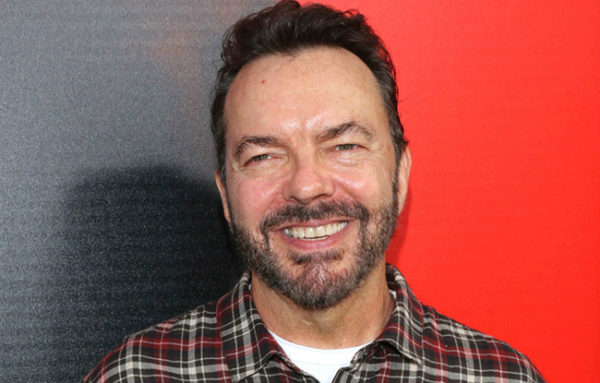 Now that so many years have passed since the airing of that very first and amazing episode of the show, it was nice to see Alan Ball come out and talk about his supernatural series 10 years after its debut during a screening of the very first pilot episode, "Strange Love," which aired on September 7, 2008.

During the screening, Alan shared lots of trivia pertaining to the creation of the series. However, what I want to write about here is my impressions of the evening.

I am a huge fan of Alan Ball and have been a long time before True Blood aired. I loved Six Feet Under and his film, American Beauty, so none of what I say below should be read as a reflection on his talent or creativity. I am probably one of the biggest fans on the planet of True Blood and I think it would be difficult for anyone to find anyone who embraced the show as much as I did.  I am a Co-owner of both The Vault - TrueBlood-Online.com and here at AllStephenMoyer.com. And the show inspired me so much that I quit a well paying job in academics in Philadelphia to move to Los Angeles. 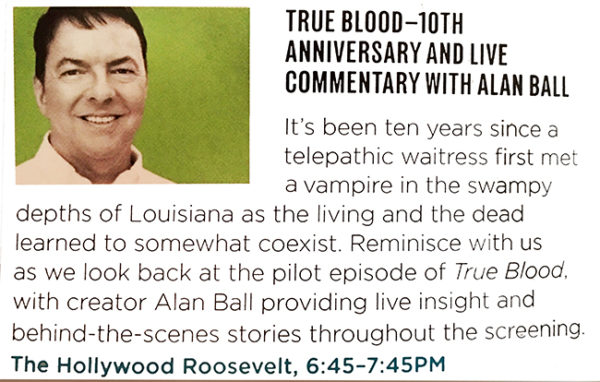 First off, let me say that any discussion of True Blood is always interesting to me, but this was not the event I had hoped for.

Alan Ball did well talking about the show and it's first episode, but I had hoped to learn something new, and there was very little of that for me. However, the most disappointing aspect of the event for me was that I was not permitted to ask any questions or go up to him after and say "Hi!. Usually at the end of a screening like this there always is a Q&A. But last night, when the episode ended, there was a very abrupt goodbye and Alan Ball was whisked out of the room. What a disappointment.

This is far different than the very first event I attended when I moved to Los Angeles in 2010. That too was an event with Alan Ball. KCRW scheduled a conversation with Mr. Ball at their headquarters in Santa Monica. The audience was small, just like at last night's screening, but it was all about answering questions and discussing True Blood as well as his other projects. And, as a result it was a much more interactive event. Also, after this screening, I was permitted to walk up to Alan and introduce myself. He was very cordial and I was nothing but thrilled about meeting this creator  and amazing talent who had created my favorite show.

The Hollywood Reporter posted an article about last night's screening.  There article details well the insights Alan shared with the audience while we watched the episode. Below is a portion of their posting.

On the casting that never was: "I read Benedict Cumberbatch. He came and read for Bill. ... Jessica Chastain read for Sookie. Jennifer Lawrence read for, in season 3 there's this werepanther girl, and she was great." (Ball wanted to cast her, but she was only 17 at the time and was supposed to be Jason's girlfriend so the age difference would have been weird.)

On the late Nelsan Ellis: "He was so amazingly talented. I'm usually not a fan of actors ad-libbing, because usually it's not particularly better than the dialogue, it's just different. But he mostly ad-libbed [his introduction] scene. ... His character dies in the second book of the series and I was like, 'No we cannot kill this guy, he's too great.'"

On Paquin and Stephen Moyer's chemistry (the two have been married for eight years): "They're falling in love [in their first scene together] because they hooked up on the second episode. The producer called me from the second episode and was like, 'I think you should know that Stephen and Anna are hooking up.' ... It was never an issue, they were total pros, and now they have two kids together. ... They thought they were keeping it secret from everybody. The whole first season everybody knew."

On Paquin and Ryan Kwanten's familial resemblance: "They really seem like brother and sister to me. And they look like each other too. The noses and the brown eyes and the blonde hair."

So, what was my impressions of this Vulture appearance as a huge True Blood fan and what did I learn at last night's event that I didn't know before?  Not Much!

What did I learn that I didn't know before?


Let me say finally that I miss True Blood every day and wish that world could have continued.  I realize that it wasn't the same show at the end, but it's first few seasons, especially the first, were epic for me and I miss it every day.


One last side note that I thought I should mention about the event. I had to go through a "metal detector" to go into the small room where the event took place. Really? I have attended many events AND, at The Roosevelt Hotel where this event took place where I was able to get up close to stars and NEVER have I had to do this. I realize that our times are very turbulent right now, but honestly, I thought this was way overkill. Just my opinion, of course.
Posted by Lynn Dougherty at 7:39 PM No comments: