Tanya Wright, who plays Deputy Kenya Jones on True Blood, appeared at Eso-Wan Books in Los Angeles, CA Tuesday night for the LA debut passage reading and signing of her book, "Butterfly Rising." Shadaliza interviewed Tanya back in August and when reading that interview, I so enjoyed learning about Tanya's many projects I thought it might be fun to hear her speak about the book.  So on Tuesday night, I attended her book signing and was privileged to get a brief video interview with her and hear the reading of two passages from her book. What I experienced, was a woman who is driven by her creativity and passion to tell a story. While she readily admits that she is an actor at heart, she has also always had a passion for writing. However, her interests don't end there. She not only wrote the book, but she has also turned it into a movie on which she had her hand in every aspect of its making. She wrote, directed and produced it, and also edited the final film.  She is truly a 21st Century version of a Renaissance woman.
I arrived early to meet with Tanya before her reading. When she came out to the main store area to greet me, even though I knew that she was a beautiful woman before we met, I had only seen her, up to this point, in her True Blood Deputy Jones uniform and therefore, I was somewhat shocked at how lovely she was. When she is in her role of Kenya, the determined and somewhat unhappy Bon Temps deputy, she doesn't come off as the gracious, bubbly and pretty woman that she is in person.  I suppose that makes her a great actress indeed. We made our introductions and then went into the store's office where I videotaped her answering the few questions I had prepared.

After the interview, I went out to join the audience in the book store while Tanya studied the passages that she planned to read. Once she appeared, and was introduced, she discussed her life as it is now. She lived in Los Angeles for fifteen years, but recently has moved back to her home town of New York City. She mentioned that she was glad to be back in LA however, if for only three days, because it is so cold back in New York City.  Before beginning to read, Tanya told the audience about the the making of the book and the film for Butterfly Rising. She discussed her many inspirations to write the book that include the death of her brother six years ago and Aretha Franklin's music. She read two passages to the audience. The first passage is about the two main characters, two women, Rose and Lilah who take a road trip to meet a mythical medicine man, Lazarus of the Butterflies. Rose and Lilah are very different women. Lilah Bell is a quirky outlandish singer who doesn't sing anymore and has fits of fury of darkness. Rose Johnson is a strong willed, aggressively masculine woman who is sexually free. She has relations with other women's husbands and she makes no apologies for it.  Many people don't understand Rose, but over the course of the book the reader comes to understand her better. The second passage was a shorter one, which is the introduction of Lazarus. He is a man who has very few words and doesn't need to say much but gets everything done. Lazarus is the basis and embodies the central theme of the book.
The video below is an excerpt from her reading and is in two parts.  The first part is of Tanya talking about herself and an introduction to the book.  The second part includes a brief portion of the first passage reading which is about a blackout that Lilah had resulting in her being put into the hospital.
After the reading, Tanya signed copies of her book for the audience.

It was a lovely evening and I thank Tanya for letting me be a part of it.
Thanks to Shadaliza for making my videos look so great!
Posted by Lynn Powell Dougherty (LYNNPD) at 8:29 PM No comments:

One thing I've learned about Stephen Moyer is that he has a very generous and giving nature. I experienced that yesterday, December 11, 2010 when I went to Universal's Theme Park in the San Fernando Valley, near Los Angeles, CA and heard him read, from Dr. Seuss' "How The Grinch Stole Christmas". My friend, Chelsea and I went together to the park yesterday and we had a wonderful time and even got to speak with Stephen after the show (see video below).
There are many more photos that can be found in the Photo Gallery
Since we had no way of knowing what to expect, we left early in order to get there in plenty of time to be assured a seat. This is the only performance that Stephen will be attending of this special program that continues throughout the Christmas season. We arranged with one of the "Show Control Supervisors" to get up front seats. This was great, since we were way early and therefore, had time to see some of the park before the event instead of spending the afternoon waiting in line.
We got in our special line at about 3:30 pm (the show was scheduled to begin at 4:40 pm). While we were waiting to get in, we saw Stephen Moyer and Anna Paquin walk by on their way to the stage area to get ready for Stephen's performance. 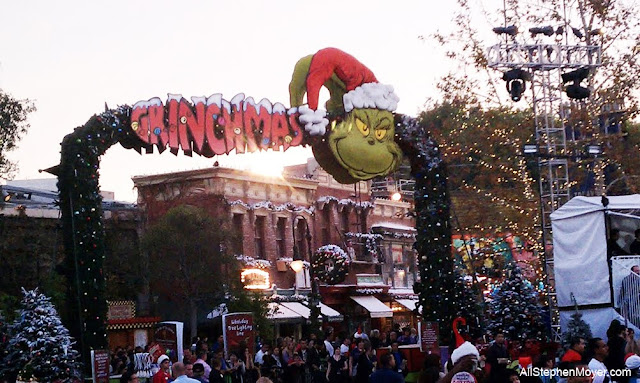 We were among the first of the audience to be admitted to our seats which were very close to the stage, just under the giant Christmas tree. The area had been used earlier in the day as a winter wonderland and a place for the children to play in the snow and get their picture taken with The Grinch. It was probably close to 70 degrees, but seemed almost chilly since we sat on benches that were on an icy and slippery floor. We were right in the middle and close to the stage which gave me an excellent view for shooting my video.  I set up my video camera and I was able to capture the entire performance.
Although we didn't have to wait in the long line, many others did and the audience was very crowded, as you can see in the photos below.  The overflow of people were permitted to sit on the ice in front of our area, right up against the stage. The decorations were beautiful and the tree was enormous. 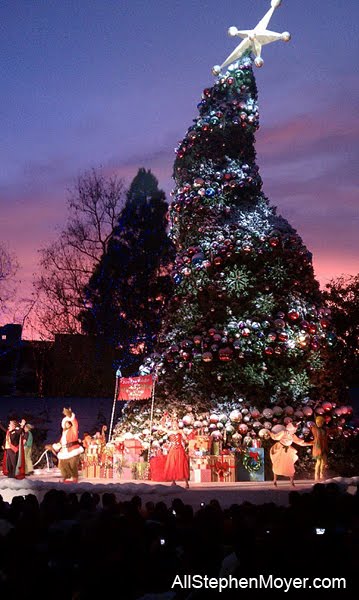 As soon as the performance began, Stephen was announced and he stepped on stage to read. His reading lasted approximately 5 minutes and then he left the stage for the Whoville characters to come on. Stephen's reading was just wonderful. He read the piece with a lot of spirit and animation. Then, he left the stage and the Whoville characters came on to perform the Grinch story. The whole program lasted about 15 minutes and everyone in the audience loved it, especially the children. At the end of the performance, they lit the Christmas Tree and one child was chosen to push the button to do the official lighting.

See the rest of The Grinch show.

Then, as people were leaving, and we were packing up our equipment, I thought, let's go around behind the tree to see if Stephen and Anna might still be there. As I walked around carefully, on the ice, I saw Steve and gave a big wave and called his name. He looked up and saw me and immediately came over. We chatted for about 15 minutes about the show and about his playing of the ukulele. Chelsea is very fond of a local band called "The Leftover Cuties" that feature the instrument in their band. They wrote the title song for the TV show, "The Big C".  She asked Stephen if he had heard of them because they play nearby all the time. He hadn't, but seemed interested and then told us that we should check out the British Ukulele Orchestra. On the drive home, we did just that, and had a great time listening to them.
Below is the video showing Stephen coming to us.

It was a wonderful and magical day that I very much enjoyed and want to say, "Thanks Steve for my lovely Christmas present".
Posted by Lynn Dougherty at 4:27 PM No comments: