Last night, I went with my friend, Pinky to the Australian's in Film, LA Premiere to see the screening of Patrick Hughe's Red Hill starring True Blood's Ryan Kwanten at the Harmony Gold Theater on Sunset Boulevard in Hollywood, CA.

I had called earlier in the week to request tickets and was lucky enough to get them even though the event was already filled to capacity.We arrived early because we wanted to be sure to get good seats and to hopefully meet Ryan when he arrived. We did just that.

As he arrived, there was a group of autograph seekers awaiting him and he was immediately surrounded by them. Pinky was able to get a photo autographed by him and Ryan was kind enough to pose with us for photos.

Ryan then was whisked to the carpet to do the requisite interviews and then, Rutina Wesley arrived and was kind enough to also pose for a picture. She also had her picture taken on the red carpet with Ryan.
The Red Carpet photos of Ryan with Patrick Hughes and Clare Van Der Boom and one of Rutina: 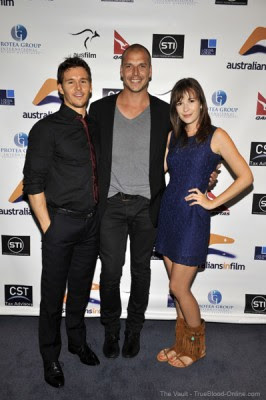 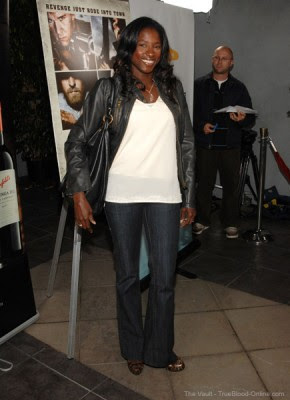 There were other True Blood stars who attended the event last night in addition to Ryan and Rutina. Both Jim Parrack and Lindsay Pulsipher were there and on the Red Carpet. 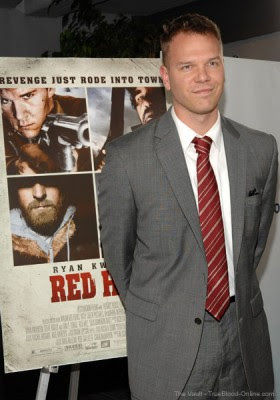 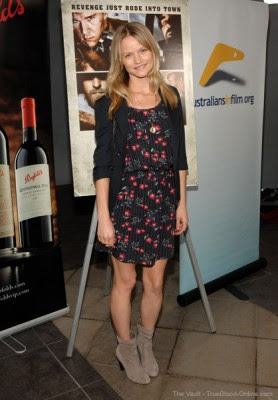 Jim is a friend whom I have met several times before. I recently saw his play Terra Haute and it was good to say hello again.
Seeing the film.
We then went into the theater to view the film. I had heard really good things about Red Hill after reading many of the reviews and therefore, I expected it to be good, but I had no idea how good.
What did I think of the film?
Patrick Hughes, who wrote, directed, produced and finally edited the film, did a phenomenal job on almost no money and Ryan's performance as Shane Cooper is astounding. In fact, the whole cast was excellent. The cinematography was unbelievable and the landscapes in that part of Australia are quite striking. It's hard to believe that they shot this film in just four weeks. This is truly a testament to excellent planning and a stellar cast and crew.The story revolves around Shane Cooper, played by Ryan Kwanten, who has moved to this small town because his wife is pregnant and needs peace and quiet. Well, Shane couldn't have picked a worse time to arrive in town because a man has just escaped from the local prison and is on his way back to get revenge on the police force of Red Hill who have put him in jail.While Red Hill may be somewhat predictable at times, there is enough surprise to satisfy the most critical viewer. And, the writing, directing, cinematography and acting are so good that you don't mind and are happy to go along for the ride.

After the screening of the film, Patrick Hughes, Ryan Kwanten, and Clare Van Der Boom came up on stage and were asked questions by Sarah Coker. Patrick Hughes talked about the making of the film and how difficult it was to do because they had so little money. He was in the process of raising funding right when the economy went sour and even had to take out a mortgage on his home. I don't know if this is why the film is so good, but the economic constraints seem to have required them to be thrifty in word and image resulting in a beautifully designed, well acted, well paced and just plain good story. It's a western that would stand up with any of the great westerns like that of "Shane" for it's beautiful landscapes and it's ability to tell the story with only the essentials and "The Unforgiven" for continuing the theme of "revenge".
Below is an audio from the discussion. In the audio, Patrick Hughes discusses the economy of shooting that was necessary because of their limited budget, how the panther scene was shot and why he prefers to shoot on film instead of going digital. The part about the panther is particularly hilarious.
I liked the addition of the panther to the story. It was interesting to hear from Patrick Hughes that they filmed a panther in LA in front of a green screen and had to mix the footage of the panther with Ryan in the barn. And, Hughes posed as the panther for Ryan while the scene was shot. Ryan said he had to keep from breaking out in laughter while trying to imagine Hughes as the panther.
Below is a short video clip of the Q&A.
In my opinion, both Patrick Hughes and Ryan Kwanten are people to watch; both are going to be big. Hughes is an excellent director and deserves whatever he gets and Ryan, well you know we all love Ryan and his acting abilities just keep getting better and better. I'd like to say thank you to both of them for being so generous and kind (Ryan, in particular, since he was nice enough to take two photos with me since the first one didn't turn out). I can't say enough about how nice both men were and appreciative of the fans. It was a wonderful night that I enjoyed immensely.
Lots more photos from this event can be seen in the Photo Gallery.
Special thanks to Pinky for helping me get all this great information and especially for holding the camera.