On Thursday, July 21, 2011 I went to Hollywood Boulevard in Hollywood, CA for the sole purpose of seeing Stephen Moyer's appearance on the Jimmy Kimmel Show. It was a great experience and I thoroughly enjoyed myself.

I left home early in order to avoid the inevitable Los Angeles insane traffic at rush hour since I had to be there for the taping at 5:30pm, PST. I met up with another billsbabe, Filmchick3, who had also reserved a ticket. We stood in line for about an hour and go into the studio after having to check our cameras. Luckily they didn't take my phone, which I expected them to do, because it was a life saver later on, as you will see.
We got seats, not at the best location, but we were right in the middle and could see the stage where Stephen was to be seated quite easily. It's great to go to these televised talk shows because it sure is a learning experience. The all are pretty much the same and here's what happens. About an hour before hand they tell you that you aren't allowed to get up at all, must turn off all cell phones, and there will be no bathroom breaks during the show. Then, a comedian comes out and "preps the audience". He tells jokes and says that we have to be a good audience and we learn when to applaud, laugh and just when to be just plain insane crazy.  The studio is smaller than you'd imagine, but we were glad of that because it makes for a more intimate experience. The "audience training session" was a lot of fun and by the time we were done, our coach had definitely done his job because we were all pumped and ready to go.
What I didn't know, since it hadn't been publicized, was that another guest was on the show. His name was Dax Shepard and he was on talking to Jimmy at length about his new film and about their vacation. It seemed like forever before Stephen came out, but when he finally did, he was great and you can see him wave to us in the video below.
Video of Stephen on Jimmy Kimmel Live..

Stephen's performance was, as usual, funny and delightful, but way too short! He was on the show for just about 5 minutes, and we couldn't believe it when he left the stage that it was already over. Then, Jimmy announced that we were all to go outside to their summer concert stage and see the concert put on by the group, "Bush." When we got outside, we noticed Stephen and his son going to the back of the concert stage, so I decided that we should stay there to see if we might be able to say hello to him before he left. We watched the concert for what seemed like a really long time and then finally decided to just give up. However, a friend of mine had told me that there was a location in the alley behind the theater where paparazzi and autograph seekers stood, so we decided to go in that direction. I immediately saw flashes from cameras and I just knew he was there signing autographs for the fans, and I was right.
We quickly went over and attempted to get his attention. He was so generous with the fans, as he always is, singing for everyone.  Right before he left, I called to him, he looked up and came back to give me a big hug.  He also hugged Filmchick.  He said, "I'll see you tomorrow, right?" And I sadly, had to reply," no I'm not going to Comic Con this year." He also asked how I liked the show and what could I say, but he was awesome, which is no lie!
Since we hadn't been permitted to bring our cameras into the studio, as I said above, and there was no time to get them. I was forced to use my Iphone to take photos and video. Below is a very short video and since my camera has no flash included are the few photos that came out OK to post. Here is the extremely short video of Stephen signing for the fans.

And here are the few photos I was able to get. 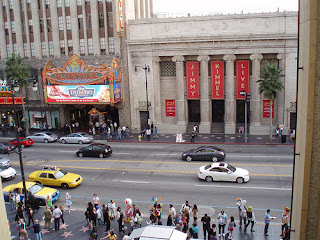 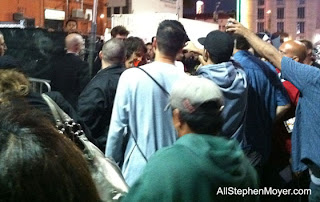 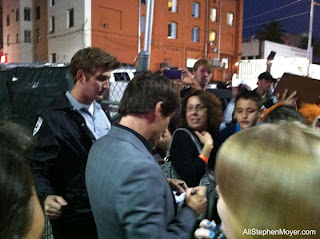 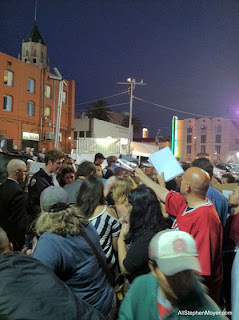 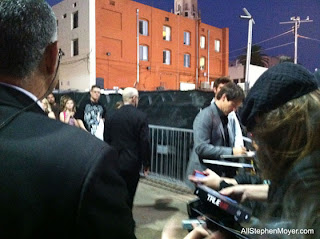 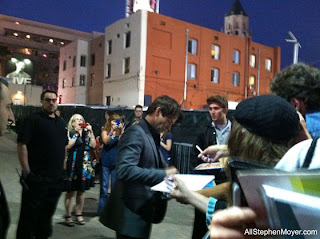 Thanks to LifeIsNotEasy for the Kimmel video.
Posted by Lynn Dougherty at 12:35 PM