Let me start off by saying that I had a blast at last Saturday's 2011 Scream Awards. It is THE BEST awards show out there; so much fun!

I attended the Scream Awards last year to cover the event on the red carpet for The Vault and I knew that last year's experience was going to be hard to beat. At that time, most of the True Blood cast attended and I was honored when Stephen Moyer singled me out on the carpet for an interview. We also got to speak to Sam Trammell and Kristin Bauer and had a wonderful time going inside to watch the show once the press period had ended.

Even so, I was hoping for a similar experience this year since True Blood was up for seven awards. Logic dictated that we'd have another year of big wins and lots of the cast participation. In early October, we were thrilled to learn that Joe Manganiello (Alcide) would attend and expected more True Blood stars to be announced at a later date.

Unfortunately, none were added to the list, but still it was wonderful to imagine the chance of meeting and interviewing Joe, so I was content with that. Also, Sean Bean (a personal favorite of mine) and Lena Headey from another great HBO show, Game of Thrones (which beat out True Blood as Best TV show), were to be there as well as Robert Downey, Jr. and Pee Wee Herman (Paul Reubens), just to name a few. So with high hopes, off I went on Saturday afternoon to drive to Universal Studios in Hollywood with my friend M'Lou who was going to be my videographer for the day.

We arrived right on time at about 3pm and parked our car in the garage, checked in to get our press credentials and took the shuttle to the back lot at Universal where the event was to take place. As we arrived, you could see the amazing outdoor stage that had been set up in a carnival theme (very different from last year), resembling a psychedelic circus. One side of the stage was a life-sized dollhouse populated by costumed characters, the other a staircase topped by a giant keyhole, and in the middle was a lake that lit up with fire (see the photo gallery for more images). 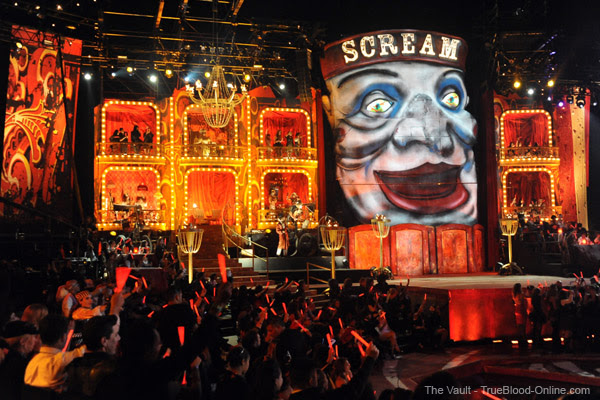 The stage of the 2011 Scream Awards

We found our spot on the red carpet and were happy to see that, although we were in a similar order as last year, we were in a much better position to grab stars as they walked by. Our spot was between "Military Press" and "Annapaquinonline.com." We have no idea what Military Press was going to be there for, but we were glad to be next to them because they didn't show up, providing us a bit more room. 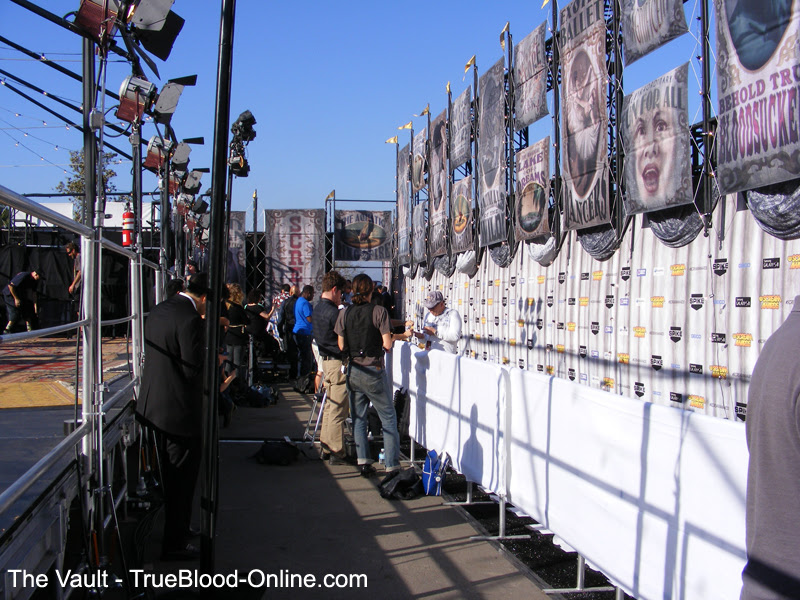 Early on the Red Carpet 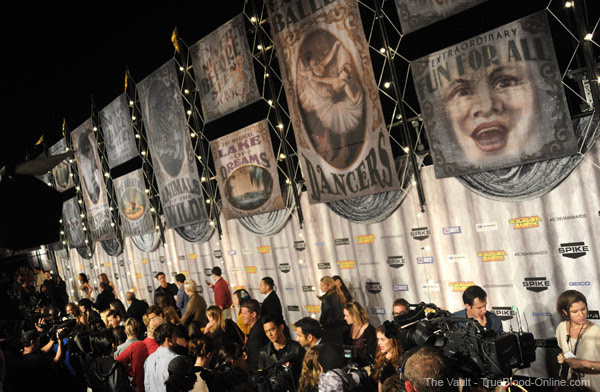 The Red Carpet in full swing

The Scream Awards attracts lots of horror film, sci fi, etc. types as well as the mainstream press to participate in the Red Carpet activities. Close to us were representatives from a magazine called "Girls and Corpses," which I found to be a curious title. They were really fun, nice people and I include the photo below of TV Personalities Allen Lee Haff and Clinton Jones as they were being interviewed by them so you could see that the magazine is real. 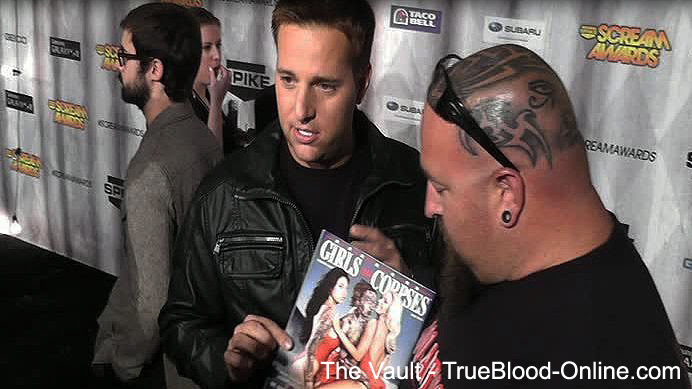 
On the other side of Annapaquinonline was a women from England who represented a British site (that, I'm sorry I don't remember the name of), but she was very nice and we spoke to her and the two ladies from Annapaquinonline throughout the night. When I saw Matt Smith of Dr. Who start to walk by, I knew the woman from England would be interested in interviewing him and I started screaming "Brit, British press..." while pointing in her direction. He came over and it was great because she interviewed him and he started talking about how he was a big "True Blood" fan and it was his favorite TV show (see the interview with Smith in the video towards the end of this article). 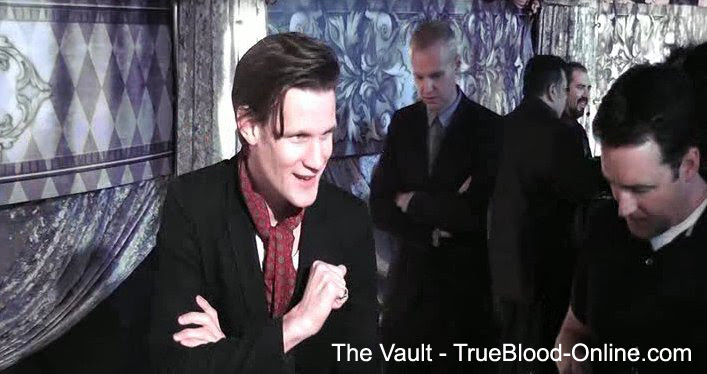 Some of the nominees and presenters did not walk the carpet; but only posed for photos. Since our goal was to to get some True Blood coverage that night, we were on a quest to hopefully get a few moments with Joe, and so we sought out the help of the "handlers" on the carpet working for Spike TV. We met and made fast friends with "Claire" who promised to help me get, Joe, as well as Sean Bean and Pee Wee Herman. You may ask what does Pee Wee Herman have to do with True Blood? Well, nothing really (or so I thought), but I like him and my sister does especially. She went to NYC to see his show live and I wanted to see him in particular for her. Pee Wee was being presented the "Visionary Award" during the evening, and was pretty much talking to all the press at the event, so I figured we'd get him.  However, as you will find out below, we found out that Pee Wee really does have a True Blood connection.

M'Lou, with the video camera, was running back and forth from our spot on the carpet to the photography area which enabled her to get some video of Sean Bean, Lena Headey, and Paul Wesley from Vampire Daries who didn't end up coming our way (again, watch the video below). 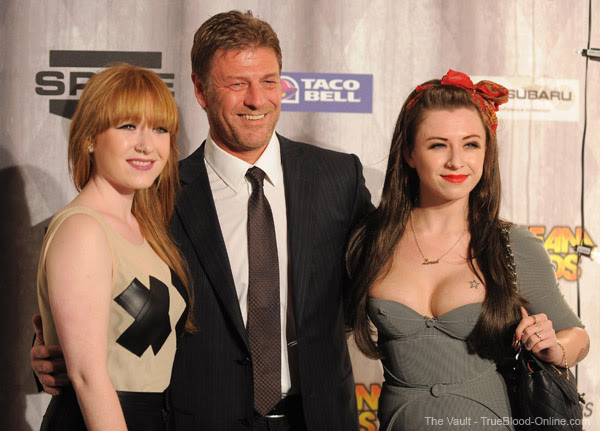 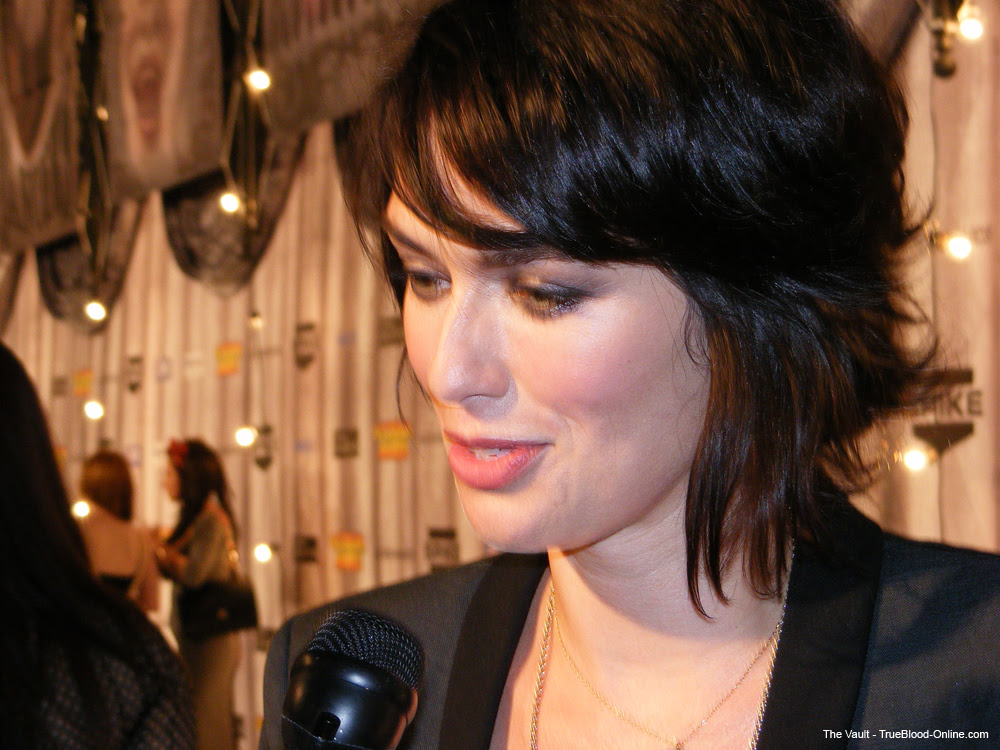 Sean Bean with his daughters and Lena Headey 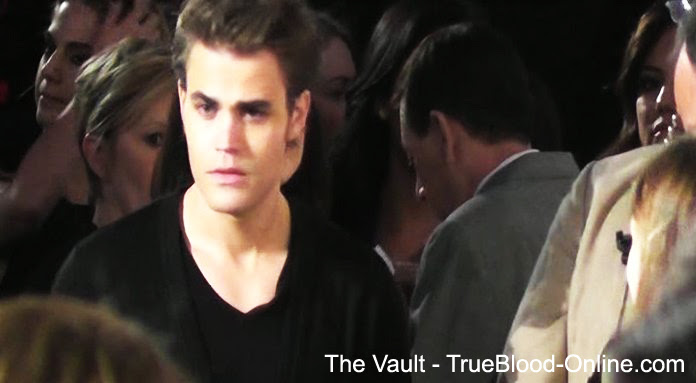 Joe and Sean Bean arrived very late to the carpet and although Claire told us that she had passed our message on to Joe's publicist, it didn't look too promising that, he or Sean Bean would stop by since the carpet was about to close, and many of the stars were being rushed off to the Green Room. But, as often does on the red carpet, fate took over and just as Pee Wee Herman was coming to me next, Joe walked past.

Since we were the only True Blood site on the carpet, Claire had told us earlier to shout out to Joe as he passed to try and get his attention (as did those around us). He waved to us, but was about to walk past without stopping, when he noticed Pee Wee in front of us. He immediately stopped and gave him a hug and a "thumbs up" and they spoke. Just then, all the main stream press photographers urged them to pose for a photo together and that's when I got the awesome pic below. Unfortunately, right after that, Joe was whisked away, so, we didn't get to speak with him. 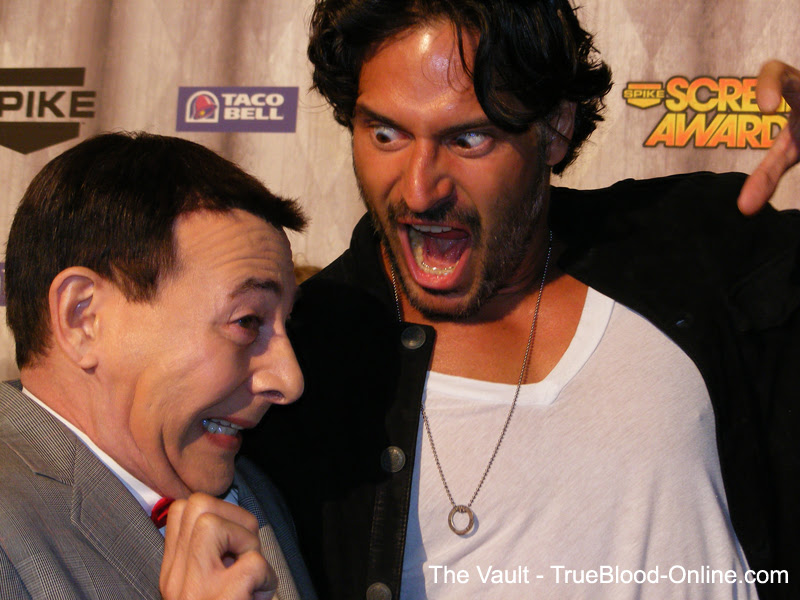 However, I did get to interview PeeWee and ask him about his vampire connection. He told me about his role in the film, "Buffy The Vampire Slayer" where he played a vampire who bit David Arquette's character and turned him. They have remained friends since then.

You can imagine how flustered I was with all that was going on and I, as a result, told Pee Wee that my sister is a big fan, and while I meant to tell him that she had seen his show in NYC, instead I said she was in NY. She wasn't in NY, she lives outside Philadelphia and was actually in Ohio at the time. Sorry Shirl!

So, even if I didn't get that hoped for Joe Manganiello interview, there really is a True Blood and vampire connection with Pee Wee and I enjoyed meeting him and am grateful to him for helping me to get the photo.

See the whole Pee Wee Joe encounter and everything else that happened by watching the video from the red carpet below. 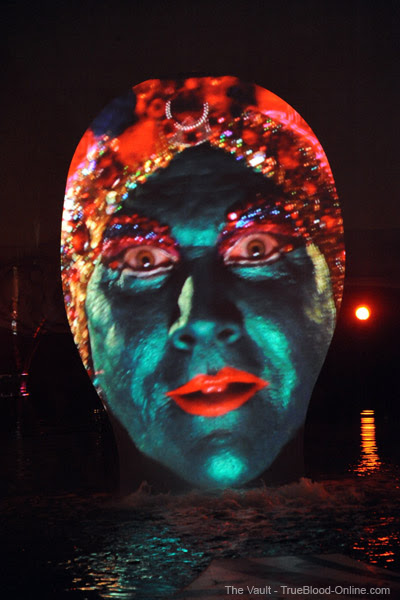 But the night didn't end there. Even stranger things were experienced. We saw a wrestler, named Abyss, on the carpet with a stick that had nails coming out of it (there's a photo in the gallery) and he was pretty strange, I can tell you.  And, Claire somehow mixed up our request to get Sean Bean for an interview and, instead sent over a very nice gentleman, named John Paragon. Mr. Paragon played "Jambi the Genie" on Pee Wee's Playhouse. He told me that he was presenting Pee Wee with his award during the program. So, while it was nice to talk to him, he wasn't Sean Bean from Game of Thrones. We both made the best of it, but I had no idea who I was talking to at the time, and I don't think he knew why I had "asked for him".

I suppose "Jambi the Genie" can sound like "Sean Bean;" if you say it really fast and are in the bizarre and macabre world of the Scream Awards, LOL!


The six degrees of separation between Pee Wee Herman and True Blood doesn't seem so big or strange to me anymore. 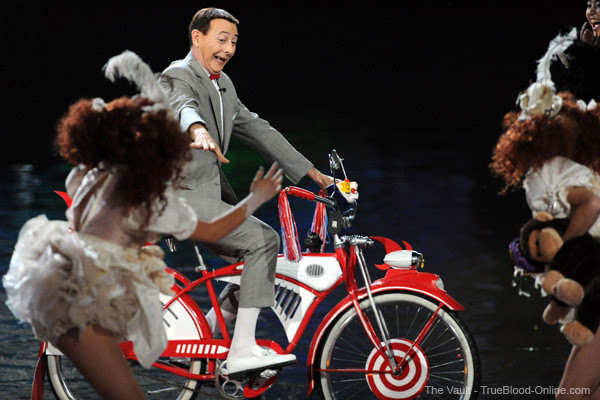 Pee Wee Herman arriving on Stage at the 2011 Scream Awards

The one and only down side of the event (and it was a big one to us) was that, unlike last year, we, as press, were not permitted to sit in the audience and watch the show, so I'll have to watch it on TV like everyone else when it airs tomorrow night. However, I still recommend going to see the event live, if you ever get the chance; it's so much fun! It was a wonderful, fun filled night and I thoroughly enjoyed myself.

There are lots more photos in the The Vault's 2011 Scream Awards Photo Gallery, so go give them a look.

Thanks to M'Lou for shooting the video and to Shadaliza for editing and preparing it.
Posted by Lynn Dougherty at 5:40 PM