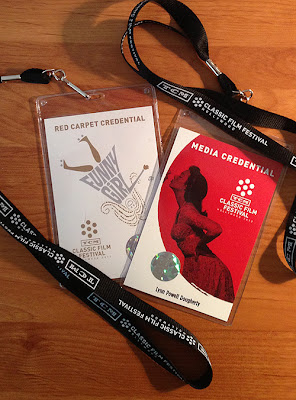 On Thursday, April 25, 2013 I was privileged to attend the Red Carpet Ceremonies for the premiere of the restoration of the film, "Funny Girl" during the Turner Classic Movies Film Festival.

Walking the red carpet that night were many stars of classic film such as, in no particular order of importance:


It was great to meet these stars and to see all the fans across from us in the bleachers cheering them on.
The film "Funny Girl" has been fully restored and it was showing that night to VIP ticket holders at the TCL Chinese Theater (formerly "Grauman's Chinese Theater."
I just read today that the Chinese Theater will be going through extensive renovation when the TCMFF ends, so I'm glad I had a chance to see all of this before then.
Here are some photos from the event:

Also, here are some, "behind the scenes" photos of our fellow press at the Red Carpet.  It was lots of fun and I hope to get a chance to do it again, but never in high heels, please!
Posted by Lynn Dougherty at 10:32 PM