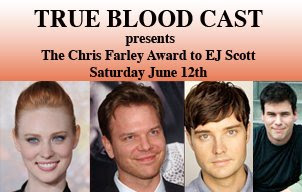 Last Saturday night, I attended one of the iOWest Festival performances at the iOWest Improv Theater in downtown Hollywood, The performance I attended was the E.J. Scott Improv session where he was awarded the Chris Farley award. Also at this event were three True Blood cast members, EJ’s girlfriend, Deborah Ann Woll (Jessica), Jim Parrack, (Hoyt) and Michael McMillian (Rev. Newlin). Before the show I spent some time with Deborah, E.J., Jim and Michael. 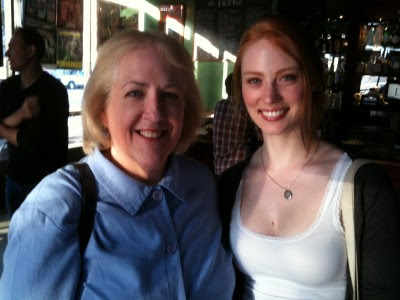 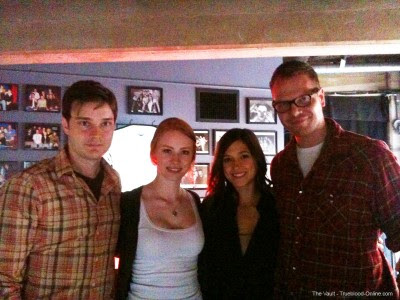 Michael McMilian, Deborah Ann Woll, Ciera Parrack and Jim Parrack
You can read my interview with EJ and Deb which is in a separate posting about EJ receiving the Chris Farley award by clicking here.
I separately interviewed Michael and Jim in the upstairs section of the main lobby of the theater and it was a quite casual and friendly time where friends where mingling together before the show.
I first interviewed Michael and in his interview, he hints that Rev. Newlin might be in Season 3 and also tells me about his new comic book, “Lucid“, which can be purchased at your local comic book store. He instructed to ask for “Lucid #1″ when you go to your local store. You can read more about Michael’s comic book here. He also talked about his upcoming independent film of “Half Dragon Sanchez” which is currently making the rounds of independent film festivals.
Then, I met with Jim who shared information about his own independent film that he is currently working on and directing, “Post“. His wife Ciera Parrack plays the lead role and they will continue shooting this summer in Los Angeles. He then spoke about his upcoming film Battle Of Los Angeles. When asked about True Blood, he mentioned what all of the cast seem to feel, that there is a real appreciation for each other, Deborah shared the same impression with me. It seems that True Blood is a great ensemble group that cares about each other and works well together. I think it shows in the performances.
Below is the video of these interviews with Michael McMillian and Jim Parrack.

Then, once the show began I got to see EJ and the Improv troup along with the three True Blood cast. 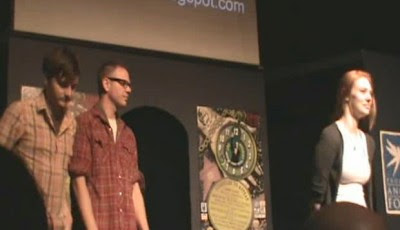 Michael, Jim and Deborah on stage
Here’s a sample of what we saw that night in the videos below:’

It was a great evening and I enjoyed meeting and hangin’ out with all four, EJ, Deborah, Jim and Michael.
Posted by Lynn Powell Dougherty (LYNNPD) at 12:23 PM