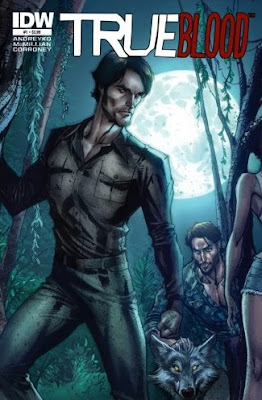 Last Wednesday night, I went to the live recording of the "Bagged and Boarded" podscast at the Smodcastle in Los Angeles. Deborah Ann Woll, Michael McMillian and his co-writer on the series 2 of The True Blood Comic, Marc Andreyko were the live guests.
After the event, I went up to the three of them to say hello and since the second series of the comic that they wrote was coming out this week, I asked both Michael and Marc to answer a few questions that I could share with the True Blood fans.
Below are the questions that Michael answered for me. While I asked him about the gift he sent to Alan Ball of a "live panda", I'm still not sure I understand his answer. At any rate, it was a touch of genious, in my opinion, to send it.

LYNNPD: Have you and Marc written all of the comics in the series or are you just completed #1?

Michael McMillian: There are actually 6 issues in the "Tainted Love" story arc. Marc and I have plotted out the entire series and are just about finished with scripting issue 5.

LYNNPD:You said that you pitched other ideas to IDW than the one used in this series of comics, can you tell me about one?

Michael McMillian: I'd love to, but shouldn't because it's always possible some could be used in the future. I can say I would love to take the TRUE BLOOD comic into new territories, perhaps highlighting single-character stories or exploring both the past and future of the TRUE BLOOD universe. Many of Marc's and my pitches reflected that, but ultimately it is up to Alan Ball picking the types of stories he wants to tell that will support the TV show. I won't argue with that guy!
LYNNPD: What does the comic offer extra that the show doesn't?

Michael McMillian: TAINTED LOVE will give you a little bit deeper look into the Tru Blood corporation. How's that for a start? Ultimately I think the comic is strongest when it fleshes out the series mythology and gives readers glimpses into realms that may not be covered on the show We'll meet new characters, visit new locations and get some back story to Jessica's life before she was turned. Also, we are working with an unlimited budget, so we can really expound on "special effects" and action sequences. Whole scenes can take place with Eric flying through the sky.
LYNNPD: How do the writer and graphic artist work together?

Michael McMillian: Well, it's really "writers" in this case. Basically Stephen Molnar receives our scripts through our editor Scott Duniber over at IDW (he is a great guy and also edited the first comic series). Stephen begins to break down the layout of the given issue in pencil. Then his art is handed off to Joe Corroney, who fleshes the whole thing out. We get a look at the finished product and suggest any last minute tweaks that we think could help the story, but so far Stephen and Joe have been knocking it out of the park.
LYNNPD: Talk more about the Vampire Liberation Front Are these extremists? Are then connected to the Fellowship of the Sun?

Michael McMillian: The VLF are a big part of "Tainted Love's" mystery, so I don't want to go into too much detail, but basically they are on the opposite end of the spectrum from the Fellowship of the Sun. They are human-hating vampires that do not want to conform to mainstreaming. They see themselves as superior to humans. They're vampire fundamentalists, basically. They don't want to be beholden to synthetic blood- its a plight against their nature. They contaminate bottles of Tru Blood with an secret ingredient that makes vampires go feral. This is their terrorist attack on vampire mainstreaming.
LYNNPD: Rev Newlins back story, can you share anything about what that might be?

Michael McMillian: I don't know all of what Alan Ball has in mind, but I always saw Steve as a privileged guy who grew up with a celebrity father and a lot of money. He and his dad didn't have the greatest relationship. Steve always strived for his father's approval, who saw Steve as a bit weak. Steve struggled to be perfect in God's eyes, and to him, his daddy was God. I think Steve's mother died when he was young and his father didn't remarry until late in his life and when he did it was to a much younger woman. I think Sarah reminded Steve of his mother and that's why he fell in love with her. He was looking to replace something which he had lost long ago. That didn't work out so well!
LYNNPD: You said that Anna Camp was your favorite actor on True Blood. Who is your favorite True Blood character to write for in the comic book?

Michael McMillian: Anna is certainly one of my favorite actors, but I was actually referring to her being one of my favorite human characters on the show. I'm a little biased. We had a great time working together. The entire cast is so amazingly talented- it's impossible to say who's my absolute favorite. With the comic, I love writing for Jason and of course, Eric. Those are both roles I would never be cast in as an actor, so it's great to play with them as a writer. I'm also having fun letting my inner Pam out. All of these characters are so rich and each one has a distinctive voice. They pretty much write themselves.
LYNNPD: Whats next for Lucid? Whats next for Michael McMillian?

Michael McMillian: LUCID #4 comes out in March, which concludes the "Magical History Tour" story arc. April will see the arrival of the LUCID hardcover collection in bookstores everywhere. It brings together the entire 4-issue miniseries. Its packed full of great bonus materials, my favorite being a reference guide to all of the magical sigils I created for the series. I had a lot of requests for that one and wanted to do it as a thank you to all the fans who gave us a shot. Alan Ball wrote the forward, which was very kind of him, and should be cool for True Blood fans to check out. Also included will be some additional art, sketches, a breakdown of the LUCID covers and their hidden symbolism and a few "remastered" sequences where I went back and tweaked certain lines of dialogue that I felt could better support the story. Nothing has changed, per se, it's the exact same story. There just were a couple weak spots that I felt could be improved upon for the collection. Fans can look at this as the "definitive director's cut" of LUCID #1. I think we've included enough that if they are essentially picking up the book for a second time, they will feel like they are getting something really special. If it does well, I'll get greenlit for a second series, which obviously is the goal. I have many more LUCID stories to tell. Vol. 1 is just the tip of the iceberg.
LYNNPD: I know you must love both writing and acting. If you had to choose one profession only, which one would, you choose?

Michael McMillian: Honestly? There's no way to choose. Acting and writing are just two different ways of storytelling and I enjoy both of them for different reasons. I don't think I'll ever stop doing either one.
LYNNPD: What was it like working for Alan Ball as an actor? And how does that differ when you are in your role as a writer?

Michael McMillian: At first, very nerve-wracking. Before we shot Season 2 I had anxiety dreams about not being able to remember any of my lines or just destroying scenes with bad acting. In reality, he is a wonderfully accommodating creator to work for. He listens to everyone's ideas, good or bad. Working as a writer for him is equally terrorizing, if not more so, because I'm encroaching on his territory. I'm responsible not just for Steve Newlin, but almost every main character in the series! Fortunately, I have a great writing partner in Marc and we share the load. But again, Alan has been nothing but supportive of what we want to accomplish. And all of his notes are dead on. Alan is a great storyteller. He has a very clear vision for True Blood and knows exactly how every element should be handled. It's a privilege to work for him in any capacity.
LYNNPD: In the recent Inside True Blood Blog you were interviewed and you mentioned that you sent Alan Ball a live panda. Really? How did you ever find a live panda and did you really send him one and what significance does it have?

Michael McMillian:Live Pandas were marked down on Amazon.com last fall. Alan Ball loves animals so I thought I'd just go for it! Anything to get ahead in this world, right?
LINKS TO THE COMIC BOOKS
LUCID: Michael’s comic book LUCID is a four-issue miniseries written by Michael and illustrated by Anna Wieszczyk. You can download the comic at www.lucidismagic.com.
TRUE BLOOD COMIC, TAINTED LOVE: