First posted on - The Vault - Trueblood-online.com

The Amanda Foundation is one of the Vault's charities this year and we have been happy to raise funds that help the cats and dogs at their shelter.
Teri Austin, President of the Amanda Foundation invited me and a guest to attend the Amanda Foundation Doggie Bow Wow in Beverly Hills Event which took place last Thursday, October 25, 2012. The event is an annual occasion held around Halloween where supporters of the Foundation parade their dogs in Halloween costumes and all for charity.
Congrats go to to Teri, who was honored by Los Angeles Magazine this month as 1 of 50 influential women making a difference in L.A. Teri was included for her huge progress towards saving cats and dogs in L.A., especially through the AF Spaymobile program. Check out pg 164 of this month's issue! You can also see our article about the Amanda Foundation and what wonderful work she and her assistant Tracy are doing for the dogs and cats of Los Angeles.

The Bow Wow Wow event took place on the famous "Rodeo Drive" in Beverly Hills, a place where I had never been before, but had always longed to see. As Teri's VIP guests, my friend and I had champagne at the opening reception in the Tiffany's store with the owners and their dogs. Then, we registered and watched the "red carpet" which was actually green grass for the doggies, as they were the stars at the event. During that time True Blood's Kristin Bauer van Straten and Abri van Straten arrived and after a few hellos, Kristin quickly went onto the green carpet to take photos with the dogs in costume.
As many of you know, Kristin is a big supporter of Amanda and is a close friend of Teri. Even though she is very busy with her own animal rights activities and is currently making her very first documentary, "Out For Africa," about the poaching of Elephants and Rhinos for their tusks, she took the time to continue her support of the local dogs and cats in the area by coming out in support.
Once the carpet photos were taken, the party began. Filing through 2 Rodeo Drive, the guests were treated to hors d'oeuvres and drinks while checking out all the items in the silent auction. Then, the main event of the evening took place, the costume contest. Teri announced each of the doggies in Halloween costumes as they were paraded on the stage to show off their wonderful outfits and to be considered for best in the bow wow show. There was an angel, a witch, dogs that were pink and green, and even a dog dressed as a hot dog, just to name a few.  By far though, the best costume of the event was the doggie dressed as "poison ivy." It was the most creative costume there and won with a huge amount of applause. 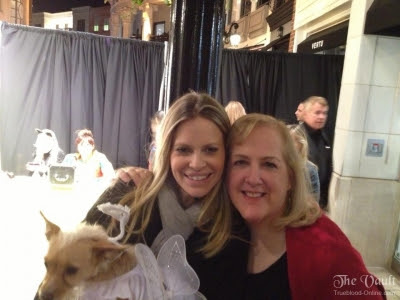 Thanks to Teri and Tracy for the invitation. I truly enjoyed myself and am always glad to see the lovely Kristin Bauer who is probably one of the kindest people I know.
Please consider supporting The Amanda Foundation by donating to save the life of a god or cat.

You can make a direct donation to The Amanda Foundation here :

Follow this link to see more photos that I took during the event.

Thanks to Shadaliza for editing the video.

Posted by Lynn Dougherty at 8:45 PM