On Seeing The Great Denis O'Hare's "An Iliad"

I went to the Broad Stage in Santa Monica, CA on Wednesday night and sat in the front row to see "THE GREAT DENIS O'HARE," in his one man extravaganza, "An Iliad." Yes, that's what I think of him, I think that he is a great actor. Ever since I first saw him in True Blood, I have been a fan, but now I think even more of him after seeing his mesmerizing adaptation of Homer's epic poem, "An Illiad" directed by Lisa Peterson. 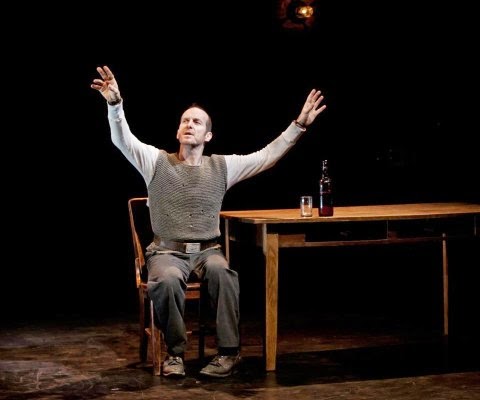 The Broad Stage program says of the show:


Homer’s epic poem roars back to life in a contemporary new telling. Obie Award-winner, Lisa Peterson directs Tony Award-winner Denis O’Hare in this stunning show that captures the grief and glory of the battle for Troy. An Iliad races through time to become breathtakingly relevant. The New York Times calls it, “Spellbinding... smartly conceived and impressively executed.”

Now, I'm not much of an epic poem fan, but when you see Denis O'Hare on stage, giving everything he's got to such a production, you just have to be in awe of his amazing talent. He made the epic poem inspirational and extremely interesting.

Like most of our readers, I was first introduced to this amazing actor when he was cast in Season 3 of True Blood in the role as the King of Mississippi, Russell Edgington. As I watched him throughout the season, I thought he had really "absorbed himself into the part," but also seemed to be having alot of fun acting such a campy role. As I remember it now, I think my very favorite scene of Denis as Russell Edgington has to be the one when he tore out the backbone of the TV newscaster. However, it wasn't that shocking act that made the scene special for me, it was the lecture he gave the public after that made it resonate.

Watch it at this address: http://youtu.be/6rZ6AQXaZpk

Although this scene from True Blood has a lot of passion, you can tell that it didn't take anywhere near the energy that the 1 hr., 40 min. production of "An Iliad" takes to do. He certainly doesn't need to go to the gym while performing his part of "The Poet" in this show because you can see that it takes a lot of energy to do it.

Perhaps because of his experience in TV and in “True Blood,” when telling the Illiad story on stage, Denis seemed to relish the battle passages, bringing alive the murderous chaos of battle and the bloodlust it unleashes, similar to his tirade as Russell Edgington in the scene above.

That's not to say that it's apparent he is using all of his strength, instead it looks just the opposite. He parades all over the stage, climbing on tables and chairs telling the tale and making you follow his every move. He owns it, that's what I mean and that's a very difficult thing to do. And he brings the play into our world, as said in a NYTimes Review, trying to explain why the exhausted Greeks didn’t abandon the battle, weary after nine years of fruitless fighting, he compares their attitude to the frustration you feel in a supermarket line: “You’ve been there 20 minutes, and the other line is moving faster,” he says. “Do you switch lines now? No, goddamn it, I’ve been here for 20 minutes, I’m gonna wait in this line. Look — I’m not leaving ’cause otherwise I’ve wasted my time.”

Read an excerpt from LA Weekly which describes the event perfectly:


Picking up from Robert Fagles' authoritative translation, this version channels the urgency of the original into a forceful reminder of the power of theater stripped to its essentials. Performing on a barren stage cluttered with backstage detritus (designed by Rachel Hauck) and lit by a single bulb (lighting design by Scott Zielinski), O'Hare assumes the guise of a weary bard, compelled to repeat his narrative as long as humanity has need of it - in other words, forever. After invoking the muses, via music beautifully wrought by accompanying bassist Brian Ellingsen, O'Hare launches into his tale, seasoning it liberally with sly anachronisms. He pauses and breaks and backtracks, his voice rising and falling, his words swooping from nervous jangle to indolent lilt and back again, charting a narrative by turns savage and tender, escalating finally into an explosive, rapid-fire recitation of each major conflict in human history. This is poetry as it was meant to be experienced, primal and raw, thrilling and transcendent.

Oh, and Denis is not totally alone on stage, the subtle, dramatic music of Mark Bennett is primarily played live by the bassist Brian Ellingsen, coaxing an amazing variety of sounds from his instrument and adding a lot to the mood of the play.

Another nice treat for having gone to the show was meeting up with Kristin Bauer van Straten and her hubby, Abri van Straten and also, Sam Trammell and Missy Yaeger. It was nice to say hello to them and snag a quick photo of each outside as they were on the red carpet. 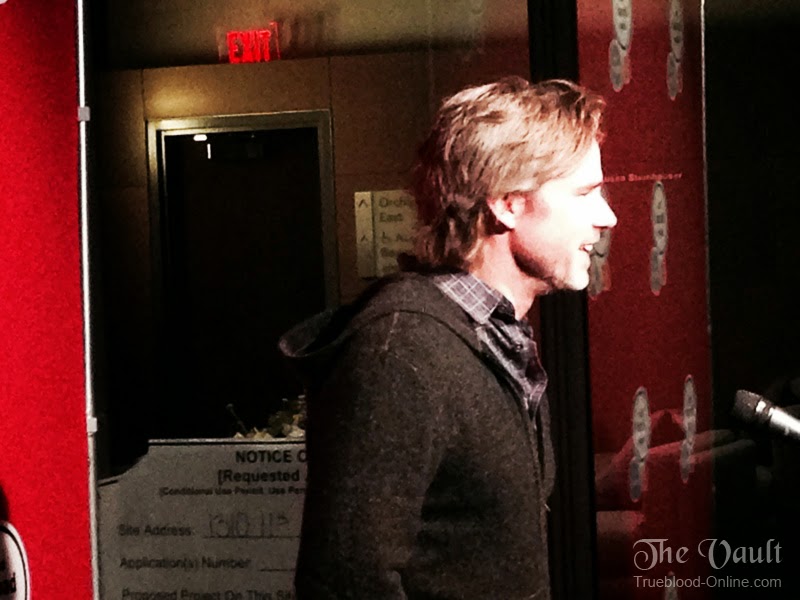 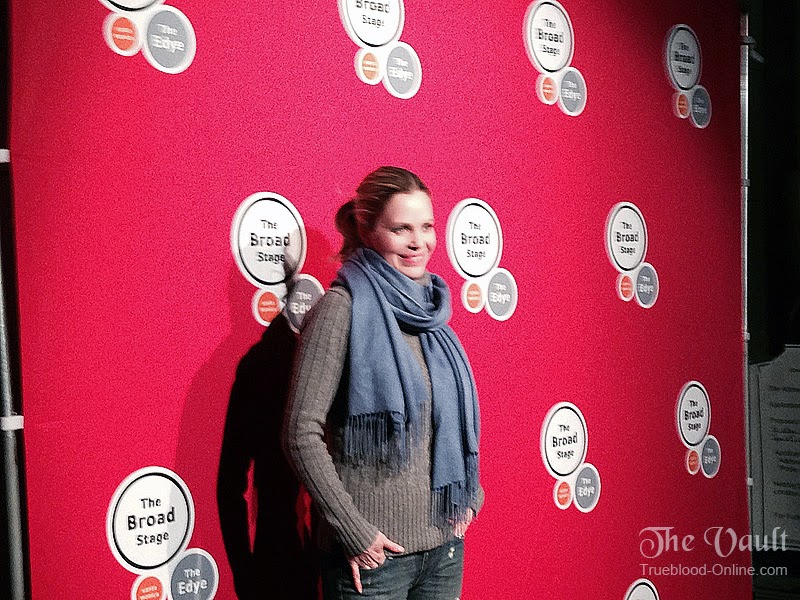 The play continued through February 2, 2014 at the Broad Stage in Santa Monica.