First published on The Vault: TrueBlood-Online.com

Last June, a friend and I attended “An Evening with FX Composers” sponsored by The Society of Composers and Lyricists at The Linwood Dunn Theater in Los Angeles where True Blood's Nathan Barr was one of three composers featured at the event. 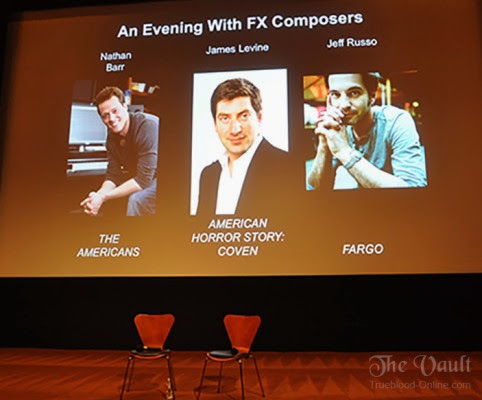 The three featured composers were:
The event was set up to first, provide individual sessions with each composer where the host asked them questions and then clips from their shows were shown. After the individual session, all three were questioned together by the host.

As many True Blood fans know, after establishing himself as an in-demand composer for horror films, Nathan segued into episodic dramatic television. The three shows he's worked on bear no stylistic resemblance to one another: “Hemlock Grove” taps his horror thriller roots; “The Americans” is set in the ‘80s; and “True Blood” is as much a collection of love stories as it is about vampires. When Nathan Barr was interviewed during the event, he discussed his collaboration with "The Who's," Pete Townsend for his new show, "The Americans."

The April 30 episode of “The Americans” featured a collaboration between Barr and Pete Townshend, "It Must Be Done," the first song the Who guitarist has ever written for television. Barr discussed the track, getting back into film and composing on cello. Working with a music legend can be a daunting task. When that legend is The Who guitarist Pete Townshend, it can be downright intimidating. For composer Nathan Barr, neither was the case.


“The original demos I did for (“The Americans”) before I got the job were influenced by those great scores from the ‘70s and ‘80s – ‘Taking of Pelham One Two Three’ by David Shire, prepared piano stuff in things like Lalo Schifrin’s score for ‘Dirty Harry’,” Barr says. “That was exciting music for me to explore. The bass and prepared piano stuff in those movies is a real jumping off point for me in ‘The Americans.’”

“The thing I really admired about him is for someone of his stature one wouldn’t be surprised if there was a big ego there, and there is no ego there,” Barr said. “He is just lovely and humble and so easy to work with.”

Listen to the song below:


Following the interviews, the questions were opened up to the audience. I asked Nathan what it was like transitioning between the very different TV shows and I was surprised to hear him reply that it's not that different. He said that True Blood and The Americans scores are really very similar using strings, etc., but certainly the melody and tone are completely different.

Listen to the theme song for "The Americans below:

Also, in the audience was Lisabeth Scott, a long time fellow collaborator providing her voice to many of his projects, specifically on True Blood.
An example is the gorgeous contemporary folk tune, "Take Me Home," which features her haunting vocals, along with Nathan's rich cello and guitar work.

Then, of course any True Blood fan will recognize Nathan's signature sound in the music he wrote for True Blood:

I went up to Nathan with my friend Els after the event and spoke to him. I asked him how he felt about the ending of True Blood and he replied that "it is sad, but it is time." I'm so glad Nathan has such a good future ahead of him with these new projects and we wish him well. We really weren't permitted to take any photos at the event, but we were allowed to take photos with the composers after the event. Below is a photo I took of Els with Nathan: 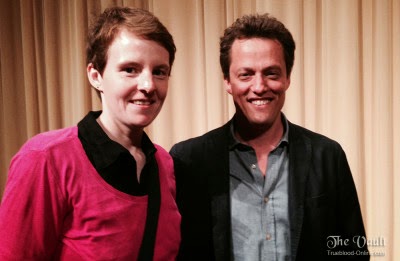 The other two composers who were featured at this event who's credentials certainly make them worthy mention here:

James Levine has also written for two completely different TV shows, Glee and American Horror Story.  He is a pianist who is known for playing gospel piano in churches which he exclaimed was odd for someone of Jewish heritage.


See a sample from American Horror Story below:

Jeff Russo started out as a rock guitarist and is a founding member, lead guitarist and co-songwriter of two-time GRAMMY® nominated, multi-platinum selling rock band, TONIC.

Jeff managed to learn his new composing trade by observation. His sound track for the new TV show "Fargo" is very understated, and as he says, the silences seem to give the music more impact.

Note: Some quotes above regarding Nathan's collaboration with Pete Townsend were taken from an interview Nathan did with The Wall Street Journal.
Posted by Lynn Dougherty at 11:41 AM