Hangin' out with Michael McMillian at Comic Con book signing 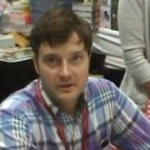 On Saturday, July 26, while the rest of the cast were signing autographs in the Warner Brothers booth in the Exhibition Hall at Comic Con 2014, Michael McMillian was seen at Chronicle Books (Booth #1506) signing his book, "Steve Newlin's Field Guide to Vampires."

Michael was very friendly and gracious to the fans who stopped by to say hello and to purchase the book. He signed each book with a personal note and was also willing to pose for a photo with anyone who asked.

I stopped by to see just what was going on in his area and to say "Hi!" and shot this short video below.